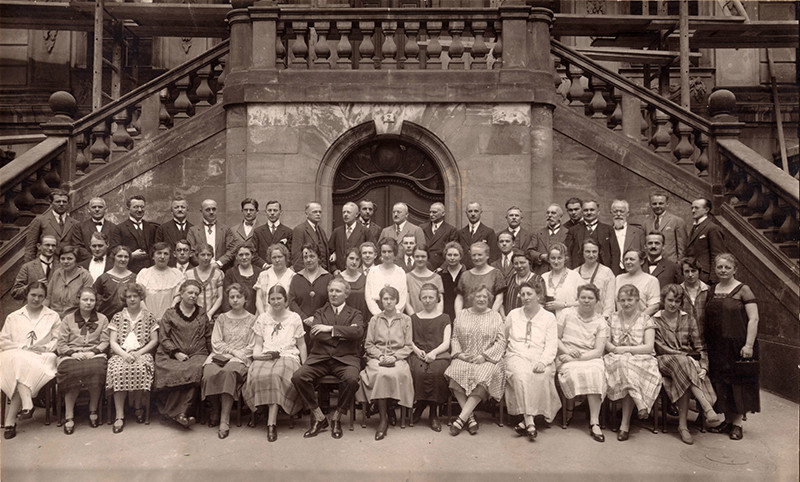 The Radio Choir of Leipzig of 1928-1930 with its head of music Alfred Szendrei in front of the “Old Merchants’ Exchange” building from where radio broadcasts were once transmitted.
Photo: MDR Chorarchiv

One of the oldest radio choirs in the world?

For the MDR Radio Choir of Leipzig, time appears to have passed more than twice as fast since 1996 as anywhere else!
How else could you explain that the MDR Choir, which only marked its fiftieth birthday in May 1996 with a celebratory concert, was commemorating ninety years of radio choral tradition in Leipzig in 2014?
That’s because the 1996 anniversary, like many more that have gone before, related to the post-war history of the choir’s concerts, which began on May 1, 1946. That was when, under the name of Kammerchor (Solistenvereinigung) Leipzig, the ensemble first performed in public in that formation under the baton of Heinrich Werlé .
On August 1, 1946, the choir was incorporated into the Mitteldeutscher Rundfunk broadcasting corporation and was henceforth known as the “chamber choir” or simply “association of soloists” of the Leipzig radio station.
Since time does not in fact elapse at a different rate in different parts of the world, a celebration in 2014 of 90 Years of Leipzig Radio Choir tradition can mean only one thing: that that tradition, the very roots of the MDR Choir as we know it today, reaches further back into the past than was originally thought and that it was only recently rediscovered …

In our account of the MDR Radio Choir by one of its members, Rüdiger Koch, we have endeavoured to compile and present to the general public the history and anecdotes relating to the ensemble’s rediscovery.
In it, the name Leipzig Radio Choir is used as a generic term for all of the phases of the choir’s development. The term Radio Choir Leipzig refers specifically to the period 1946 to 1991. Where the various names of the choir adopted over the years are used, these do not imply the existence of multiple choirs, since they all refer to the same body as it developed over the years.
We have endeavoured to quote all sources used without allowing the number of footnotes to become unmanageable. The essence of this history is based on the brochure entitled Erster kurzer Abriss der Frühgeschichte des MDR Rundfunkchores von 1924 – 1946, or “a short introduction to the early history of the MDR Radio Choir from 1924 to 1946”, which in December 2002 brought together the first results of research and was published in a second edition in March 2003 under the title Material zu einer Frühgeschichte des MDR Rundfunkchores Leipzig von 1924 – 1946 (material on the early history of the MDR Radio Choir of Leipzig 1924-1946). The multimedia chronicle by Rüdiger Koch presented here also includes further details which have been gleaned since then.
To make this information available to an even wider audience, an English translation is included, provided by Janet & Michael Berridge Translations of London.