“I am living the dreams I had as a little boy”.
Yannick Nézet-Séguin at the rostrum of the Dresden Staatskapelle, September 2008
Photo: Matthias Creutziger

Darling of the music world:
The conductor Yannick Nézet-Séguin and the Staatskapelle Dresden

It was a debut that will long be remembered:
It was in October 2006 that Yannick Nézet-Séguin first conducted the Dresden Staatskapelle, which with its invitations to younger conductors in particular was increasingly emerging “as a talent scout for the next generation of baton-wielders” (German daily Die Welt).
The 31-year-old newcomer, whose very name was a tonguetwister for most, had hitherto attracted the most attention in his native Canada; since 2000 he had been directing the Orchestre Métropolitain, little brother of the Orchestre Symphonique in his birthplace of Montreal. After debuts with orchestras in Toulouse, Göteborg and Birmingham, he was now in the Semperoper, standing for the first time in his life before one of Europe’s long-established, tradition-steeped orchestras.
And he was no disappointment – just the opposite. Straight away at rehearsals, it was obvious that this young man
knew exactly what he wanted in works by Britten, Ravel and Shostakovich; in concerts, he was in full command of musicians and audience alike with his energetic and precise conducting manner, his sense of sound and rhythmic structures.
Word soon got around that news of “the Great Canadian Conductor for whom this country’s classical
music buffs have been waiting” (Toronto Star) was more than a mere marketing device.
And people believed him when he admitted – as he did in a pre-concert interview – that conducting had been “like a vocation” for him ever since he was ten years old.
“Today I have the feeling that I am living the dream I had as a little boy,” he confessed. “Birthday concert” of the Staatskapelle with Bruckner’s Third and Yannick Nézet-Séguin in the Semperoper, September 2008r
Photo: Matthias Creutziger

Dresden at the crossroads of international careers

Dresden was only the first stop for the French-Canadian who had been assistant to the great Carlo Maria Giulini in his early twenties. The very next week, he made his debut with Rotterdam’s Philharmonisch Orkest, who were looking for a successor to Valery Gergiev and promptly appointed him their new Principal Conductor from 2008.
He was made Principal Guest Conductor of the London Philharmonic Orchestra that same year. In the summer of 2008, he made his Salzburg Festival debut with Gounod’s Roméo et Juliette, and the intervals were dominated – on a night when Nino Machaidze and Rolando Villazón were giving opera-lovers a “dream team” on stage – by talk of this young Canadian conductor.
“The best singer is the conductor”, said the Frankfurter Allgemeine Zeitung in the title to its review; Nézet-Séguin signed a contract with Deutsche Grammophon and received invitations from the Berlin and Vienna Philharmonics, La Scala in Milan, the Royal Opera House Covent Garden and the great American orchestras.
2012 saw the next appointment: in succession to such stellar figures as Leopold Stokowski, Eugene Ormandy and Riccardo Muti, he was announced as the eighth Music Director of the Philadelphia Orchestra.
This body of musicians, one of America’s “Big Five”, was on the brink of bankruptcy; Nézet-Séguin’s compelling commitment not only saved it but reinforced its top ranking in the international orchestra league.
The New York Times wrote of the conductor that the “ensemble known for its glowing strings and its homogeneous warmth had never sounded better” than under his command. This was now the stuff of legends. 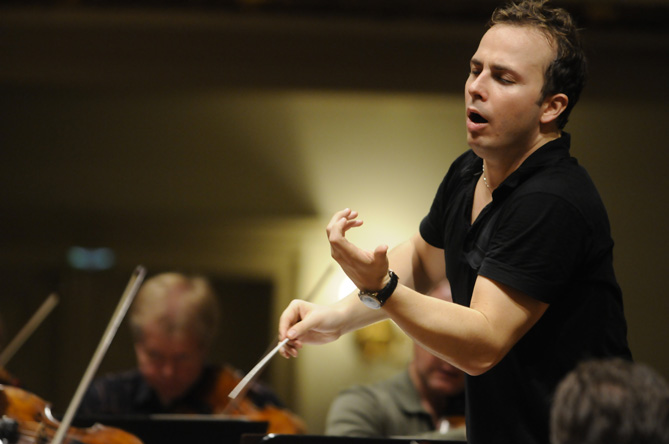 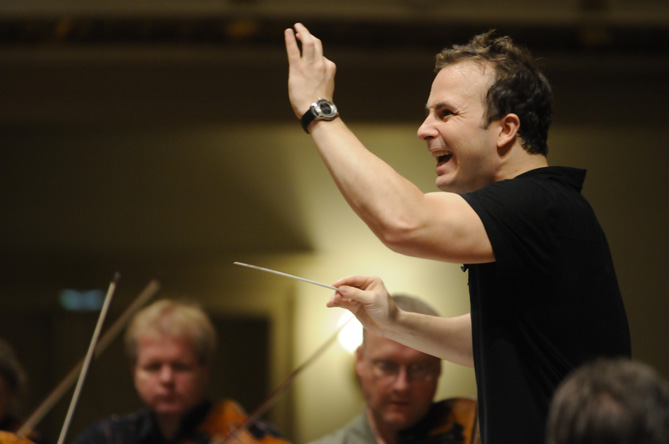 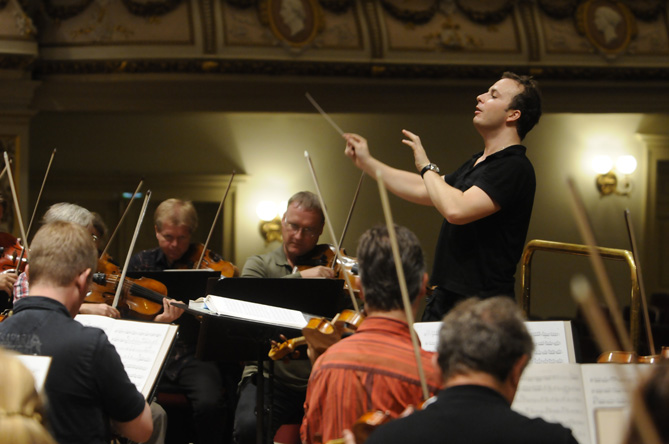 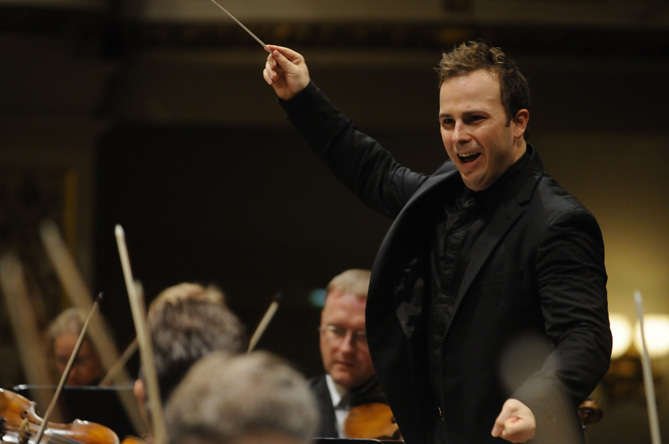 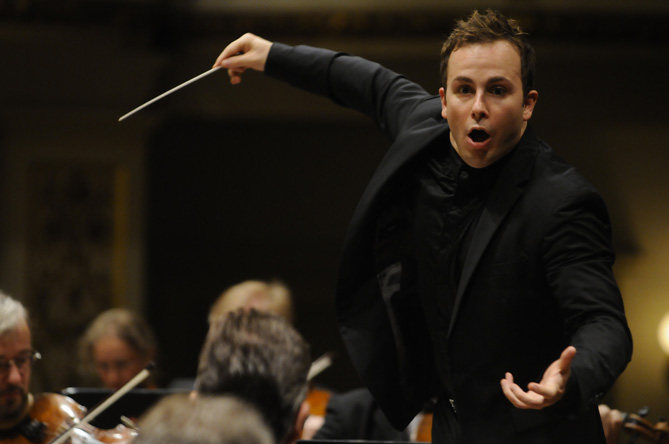 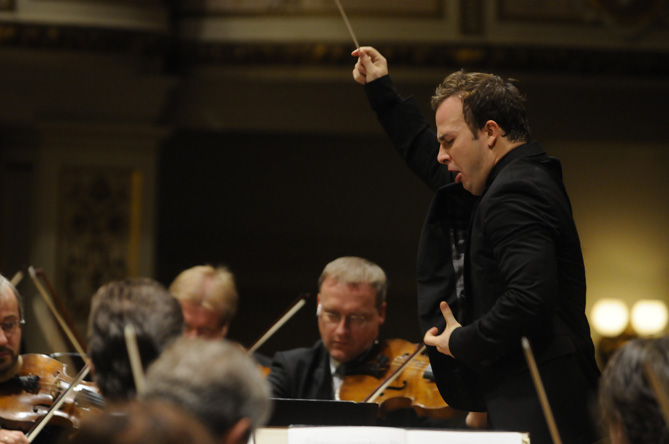 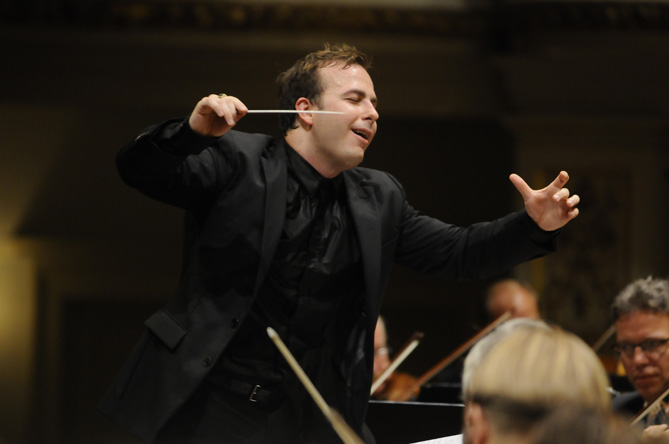 Dresden was another regular destination – despite his increasingly crowded concert calendar – for Yannick Nézet-Séguin. The Semperoper was the scene of his reunions with the Staatskapelle for Debussy’s Jeux (2008) and Stravinsky’s Rite of Spring (2012); in the Frauenkirche, in 2010, he conducted works by Beethoven and Saint-Saëns.
In 2015, on the first European tour he made with his Philadelphia Orchestra, he again played in Semper’s opera house during the Dresden Music Festival.
Back in September 2008, the Staatskapelle had entrusted to him the symphony concerts marking their 460th anniversary. This “semi-jubilee” coincided with the 150th anniversary of the Staatskapelle subscription concerts. The programme was naturally tailored to the history of the orchestra. Alongside the Double Concerto by Johannes
Brahms (who had been an honorary member of the Staatskapelle’s former Tonkünstler-Verein) with soloists Julian Rachlin and Mischa Maisky, the French-Canadian conducted the Third Symphony of Anton Bruckner. For this work, the decision was made not to play any of the familiar versions but to revert to the seldom played Urfassung, posthumously premiered by the Staatskapelle in 1946, which had dropped out of the orchestra’s concert repertoire.
Many conductors shun this original score because of its gigantic dimensions (it lasts about 20 minutes longer than the later versions). Not so Yannick Nézet-Séguin: he was “raring to go” with the “Wagner Symphony” of 1873, which he has since performed with his orchestra in Montreal and recorded in the studio. But he is particularly happy with this Semperoper release from 2008, with the orchestra of its premiere.

These days “Yannick”, as he is widely known, is a darling of the music world, a conductor whom the great orchestras, concert halls and festivals fight over. He regularly conducts the Bavarian Radio Symphony Orchestra (BRSO) and the Berlin Philharmonic, for which he was tipped in the press as a likely Principal Conductor …
June 2016 brought definite news of his future career: from 2020, Yannick Nézet-Séguin will be Music Director at the Metropolitan Opera in New York and will thus match Philadelphia with a second key position on the international music scene.
“Today I am surely the luckiest music director in the world,” he said just after his appointment, which will allow him to indulge his long-held passion for opera at last.
There is one thing that can confidently be expected: in this position, shaped for over four decades by the character of James Levine, Yannick will once again deliver new impetus, opening up this venerable institution to the 21st century and attracting a younger audience. It is the climax (to date) of an exceptional career, which has progressed
at almost alarming speed.
“I try to be the same person, no matter where I go: a young man from the ‘New World’, who feels very privileged to be able to work where this great music culture has its roots,” he said in 2006 before his first Dresden concert. Going forward, he will focus more intensively on the North American continent. The hope remains that he will not forget his early “breakthrough” in Dresden and will return frequently to the rostrum of the Staatskapelle. 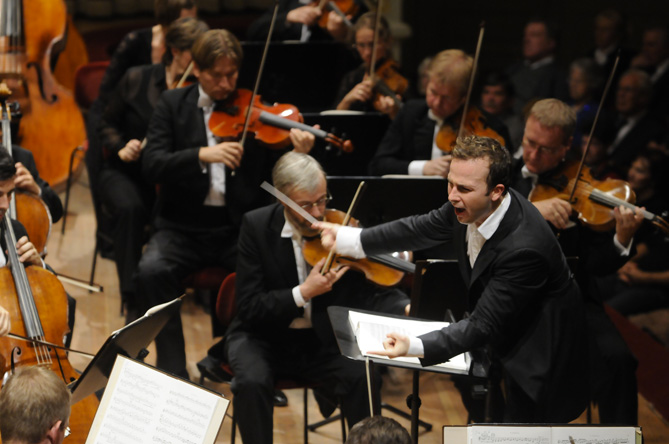 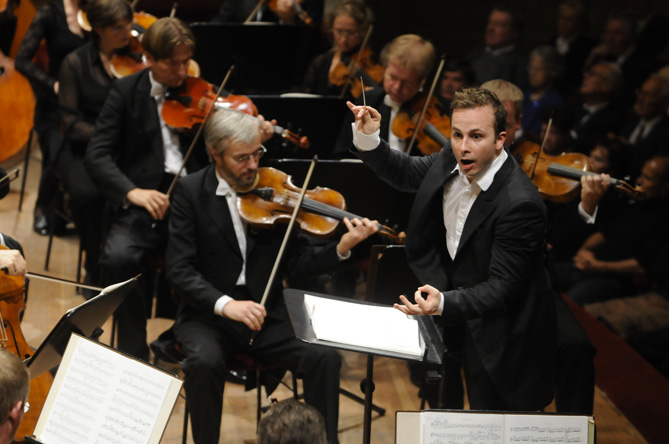 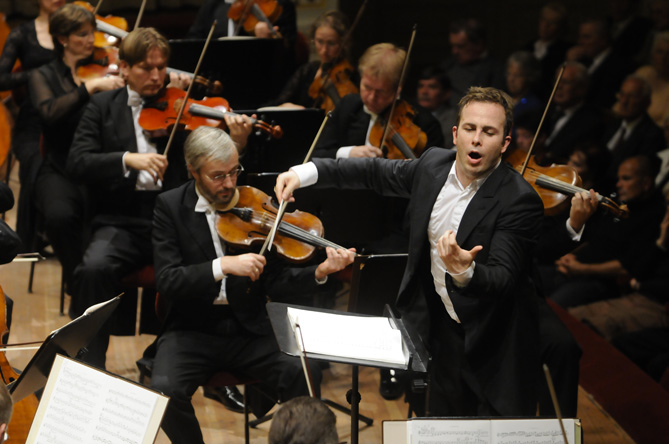 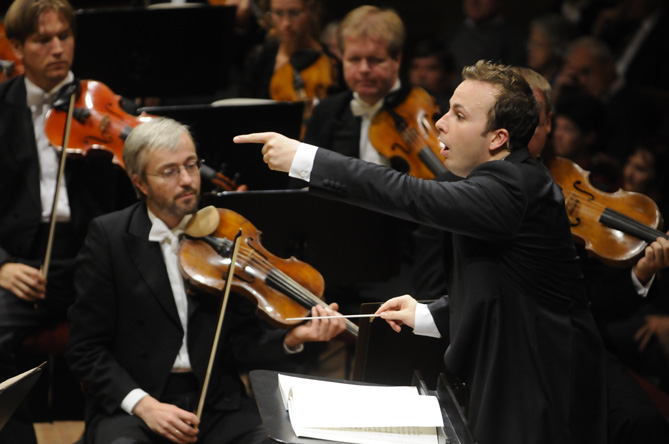