Busch’s broadcasting activities in Dresden have so far largely gone unnoticed. He himself reported on them to Arthur Tröber at the end of March 1933, trusting that Tröber would use the information in his “interest and to reveal the truth”. Here too, Busch was attempting to invalidate the claims of his adversaries that he had been primarily interested in gaining financial advantages for himself.

Busch went on to mention broadcasts of Mahler’s Eighth Symphony and Bruckner’s Fourth Symphony from the Semperoper (Busch’s last Dresden concert on February 17, 1933), and of Gluck’s Iphigenia from the Festspielhaus in Hellerau near Dresden.

There must however have been far more projects than just the ones he named since, as he wrote, he had “conducted all the operas broadcast from the Semperoper in Dresden free of charge” and had done what he could to secure additional payments for the musicians, to which they were not entitled for contractual reasons.
Busch stated that for the Symphony of a Thousand he was paid a fee of 400 marks, which he had as a matter of fact shared with a répétiteur. It is regrettable that it was still not possible to record all those live radio broadcasts; they would have given us more insight into Fritz Busch’s operatic and concert activities.
⇒  more details [sorry: only in German] On February 25, 1931, the Staatskapelle under principal conductor Fritz Busch gave a guest performance at the Philharmonie in Bernburger Strasse in Berlin.
The local papers reported the event in detail. The Vossische Zeitung even compared the event with the orchestra’s earlier guest performances under Ernst von Schuch and Richard Strauss.
The significance of the concert extended beyond the immediate region, with “Deutscher Rundfunk” broadcasting it via its transmitters in Berlin, Magdeburg and Königs Wusterhausen, so that the concert could be received in other countries as well.

The management of the “Reichsrundfunkgesellschaft” had at an early stage provided for Europewide transmissions of special events and also for preserving the musical broadcasts for posterity.
The sensational guest performance of Arturo Toscanini and the New York Philharmonic on May 28, 1930 at the Philharmonie in Berlin had for example not only been available to a worldwide audience over the radio antennas, but was also recorded, archived and catalogued.
That unique sound document of broadcasting history has been lost. All that remains of it is an entry in the first catalogue of the “Reichsrundfunkgesellschaft sound recordings”. The case of the Dresden Staatskapelle’s guest appearance nine months later is slightly different. Although the first part of the concert has been lost, the recording of its climax, Johannes Brahms’s Second Symphony, has survived. Several issues arise concerning that memorable recording, one of them being the fact that it does not appear in the otherwise very meticulously kept recording register of the “Reichsrundfunkgesellschaft”. It was never officially catalogued. So what had happened? 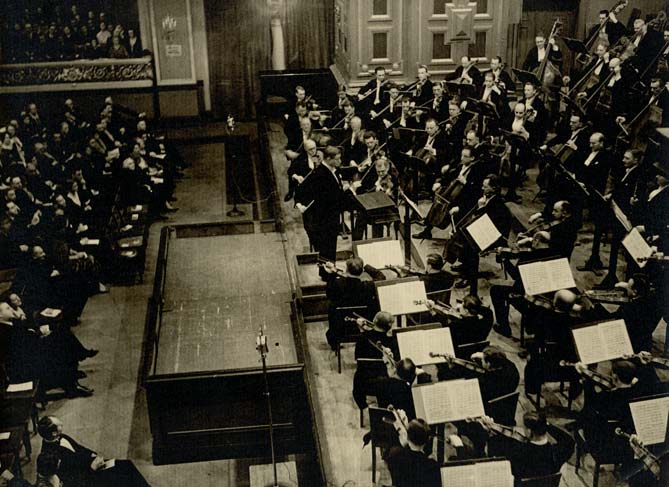 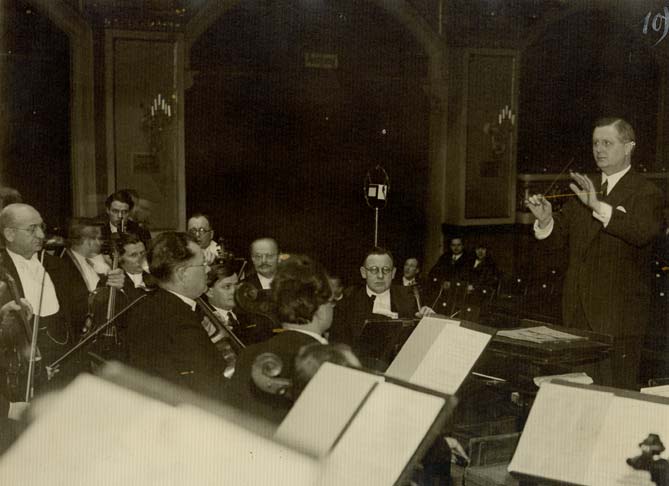 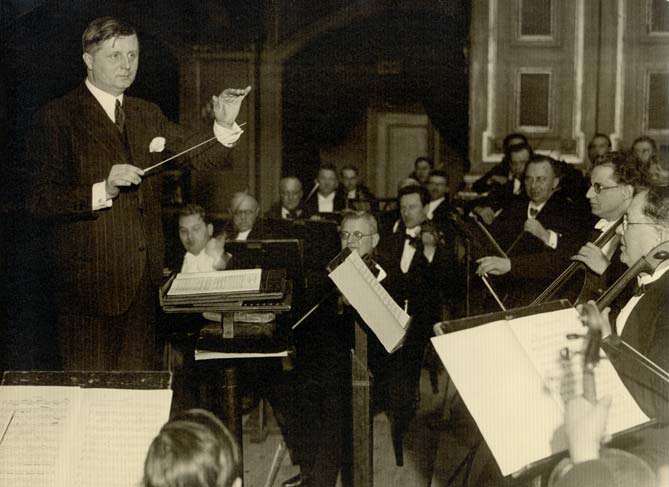 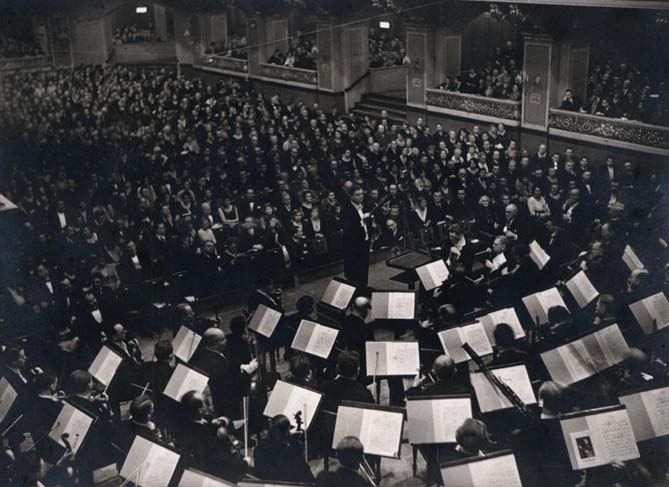 On Wednesday, February 25, 1931, Busch gave a guest performance with the Staatskapelle of Dresden at the Philharmonie in Bernburger Strasse in Berlin for the first time in six years. The programme comprised Beethoven’s “Fourth Symphony”, Mozart’s “Piano Concerto in F major” K459 (Mieczyslaw Horszowski) and Brahms’s “Second Symphony”. The photo shows Fritz Busch and the Staatskapelle immediately before the radio transmission from Berlin.
The Reisz microphone can be seen in the middle.
Photos: Max-Reger-Institut – BrüderBuschArchiv

Broadcasting was still in an experimental phase in 1931, but the signs of the times had been recognized. In the long run, radio would not be able to survive by broadcasting only commercial recordings.
The “Reichsrundfunkgesellschaft” was working at full steam to build up an archive of its own recordings.
Shellac discs were still the only available recording medium.
Recording smaller pieces of three to four minutes’ playing time was no big problem, but long works like operas, symphonies or radio plays presented difficulties and for many years they continued to be transmitted live, either from the broadcasting studios or from public concert venues.
The plan was to have equipment running in the background to record the event directly and enable works to be rebroadcast at a later stage, but a means had to be devised by which music could be played back without breaks occasioned by turning discs over or changing from one disc to another. The MIRAG recording studio in Leipzig with two wax disc cutters for continuous recording. The radio matrices of the Brahms symphony are not labelled, merely bearing engraved numbers. In order to not to have to change them so often, the matrices ran at the then very slow speed of 33 rpm. The stylus began in the middle and worked towards the edge.

78 rpm shellac discs and the recording waxes used to produce them had a maximum recording capacity of four and a half minutes per side. An “overlap area” was introduced relatively early to ensure a smooth transition. That meant that the last 30 seconds of one side of a disc were repeated at the beginning of the next side. To achieve this, two disc cutters were used, the second being switched in shortly before the first reached the end of a disc, so that both machines recorded the same audio signal for a short time. The process was repeated until the complete work had been recorded. Playback involved using a similar procedure with two record players. It rested with the broadcasting technician to switch over from machine “A” to machine “B” at the most favourable point in both overlap areas. It was a laborious and above all very hit-and-miss method, since overmodulating, careless handling of the warmed wax disc or the slightest flaw in it sufficed to ruin to the whole recording. Other than in the case of commercial recordings, which did without an overlap area, it would not have been possible to silently replace only one side of a disc with a new recording without interrupting the flow of the music and destroying the atmosphere it had created. Was it worth the risk for such important events as an appearance of the Dresden Staatskapelle? Solutions were sought feverishly. For a short time, it was believed that the answer lay in the cinema film, the supposed rival of radio broadcasting.

The Film-Kurier of July 20, 1928 reported on the merger of the German sound-film industry into the “Ton-Bild-Syndikat”, which became known as TOBIS. Important representatives of commerce, industry and culture as well as ministerial counsellor Gieseke from the “Reichsrundfunkgesellschaft” took part in the negotiations. It would be interesting to investigate whether the “Reichsrundfunkgesellschaft” had shares in TOBIS. They were in any case interconnected and the RRG probably had access to the various sound-film recording processes controlled and marketed by TOBIS.

At that time, the film industry worked with a picture camera and a sound camera in combination. The latter device converted the amplified audio signal into a light signal, which it recorded on a separate film. The picture and sound were synchronized and copied onto a single film in a subsequent process. The question was whether this method of recording sound could be used in broadcasting. The advantage was that a reel of film allowed an uninterrupted recording time of ten minutes – more than double that of the conventional disc recording process.

Converting to the system would have farreaching consequences, however. Every radio station would have to be fitted out with sound-film equipment which, as film magazines never tired of reporting, required considerable technical and financial resources. The licences for the use of sound-film projectors were hugely expensive and the industry was not open to negotiation. The press itself spoke of a “sound-film war”. Many cinemas could not afford the expense of changing over to sound film. Faced with the threat of enormous financial losses, the film companies themselves had to find a transitional solution. They transferred the film soundtracks onto outsized discs with a diameter of 40 centimetres (about 16 inches). In order to be able to hold the soundtrack of a whole reel of film, those discs ran at a speed of 33 rpm. Was the concert captured on film cameras too, then? The live recording of Johannes Brahms’s Second Symphony with the Dresden Staatskapelle under Fritz Busch of February 25, 1931 uses that system. The four discs with a speed of 33 rpm and a diameter of 40 cm are today in the “Deutsche Rundfunkarchiv” in Wiesbaden.
That “Needle Sound” system was extremely shortlived. Common occurrences like an error in the synchronization of film projector and record player, the loss of film footage caused by splicing each time the film broke or a flaw on the disc surface all had fatal effects on the cinema experience and tended to provoke involuntary laughter. Besides, the sound quality was unsatisfactory, dynamic modulation being severely reduced by the slow speed. The tone sounded flat and dull and dialogue was hardly intelligible due to the low volume.

It was presumably those deficiencies which caused that live recording of the Staatskapelle concert to be omitted from the production catalogue of the RRG. The greatly increased noise level brought about by the slow rotation speed makes the opening pianissimo bars of the symphony hardly perceptible, and they would probably have been completely inaudible in a radio transmission. Modern technology has allowed us to alleviate that shortcoming to a considerable extent. Whatever its quality, the recording remains a historic document, being one of the earliest examples in the world of a concert event recorded live and presenting all music-lovers with a poignant and emotional musical moment, an echo from a bygone era.